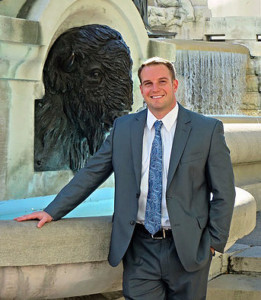 Kevin Potts is an experienced trial attorney and litigator. He worked as a deputy prosecutor at the Marion County Prosecutor’s Office for 5 years. He has tried nearly 200 criminal cases ranging from misdemeanors to complex major felonies including A/Murder, Robbery, Burglary, Aggravated Battery, Strangulation, Forgery and Theft amongst others. He did so while possessing an extraordinarily high felony conviction rate (upwards of 95%). The final two years of his employment with the Prosecutor’s Office, Kevin was in the Major Felony unit litigating the highest levels of felony crimes in the state of Indiana. He is also very knowledgeable on OVWI and traffic citations both through litigation and training via IMPD and law enforcement seminars as well as Continuing Legal Education courses including being a member of the Nation College of DUI Defense.

Kevin attended Indiana University Bloomington for undergrad and received a bachelor’s degree in philosophy with a minor in psychology. After college, Kevin attended law school at Indiana University Robert H. McKinney School of Law where he received a juris doctorate. While attending law school Kevin received the Norman Leftstein Gold Award of Excellence for his vast pro bono work as an intern with the Marion County Prosecutor’s Office.

Kevin was born and raised in Indianapolis, IN and attended Franklin Central High School. He now resides in Broad Ripple where he is an active member in the community, enjoys cycling and is a devout Indiana basketball fan.

Can Police Search My Home with No Warrant? Consult an Indianapolis Criminal Defense Lawyer

August 1st, 2020|Comments Off on Can Police Search My Home with No Warrant? Consult an Indianapolis Criminal Defense Lawyer

Most people understand some basic laws, but when it comes [...]

Please follow the link below to view authentic reviews of Potts Law LLC and the impact our firm has had on real people. We at Potts Law LLC are proud to have positively impacted the lives of so many throughout the state of Indiana and look forward to doing what we can to improve our clients’ experience in the future.